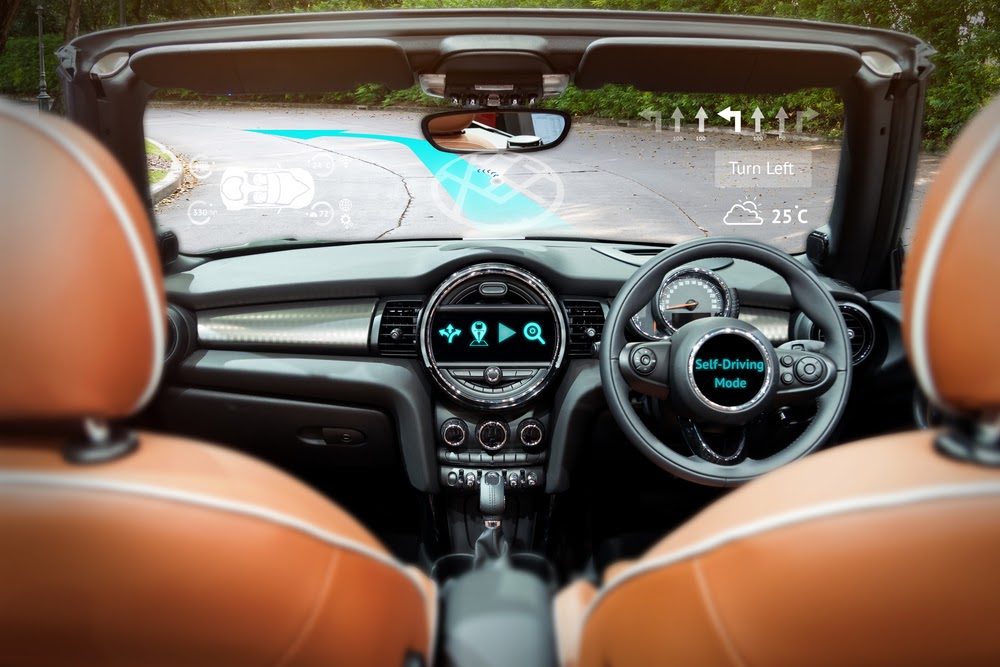 Car manufacturers are integrating more high-tech upgrades in newer vehicle models in response to both the ever-evolving digitization trends and perhaps consumer demand as well. As smartphones have become the dominant personal communication device, manufacturers have opted to include compatible infotainment systems as standard features.

Augmented reality showcases the user’s real world environment and transposes digital graphics within that environment. While augmented reality has been mainstream thanks to the wildly popular video game app Pokemon GO, this technology also has been incorporated within daily life for many consumers…perhaps without them even realizing that what they use is, in fact, augmented reality.

Vehicles have included backup cameras for more than a decade; these cameras have aided drivers in seeing hidden obstacles lurking behind them or even in navigating tight parking lots or garages. While the earlier backup cameras merely showed the real-world view directly behind the driver, over time and thanks to tech advancements, these cameras have evolved to feature digitized grid lines that show the driver their predicted turning radius. These gridlines and other graphics displayed on the screen are an everyday example of the use of augmented reality.

Many cars also include front cameras that show the driver the view from the front end, and other cameras also could be positioned around the vehicle to give a full-view of the vehicle as it navigates tight spaces. Drivers can easily discern if their wheels are turned at the correct angle to avoid contact with another vehicle (or obstacle). In many vehicles, sensors will detect these obstacles and alert the driver with a beeping sound or other warning noise.

Newer vehicles might even incorporate augmented reality into the rearview mirror. These ‘smart rearview mirrors’ also access the rear camera to show the driver a more accurate view behind them. These mirrors are especially useful during night driving or in rainy conditions.

However, back in 2010, the Ford Fiesta was incorporated with augmented reality into its rear view mirror. This is how drivers were viewing the data from the backup camera!

Infotainment systems in most vehicles are standard now. They can sync with smartphones, and this compatibility and connectivity allows drivers to answer calls without grabbing their phone.

In addition, data from the phone can be displayed and streamed via the infotainment screen. Drivers can play their favorite music from their playlist on the go. They also can send texts via voice command or even just pull up the map app from their phone.

However, the infotainment system isn’t the only site within the car that’s interwoven with technology. Cars are getting smarter, and as many drivers have likely enjoyed the convenience and enhanced safety capabilities of augmented reality features, more aspects of the vehicle are incorporating this virtual-type experience.

Panasonic’s augmented reality dashboard is in development and might drive into new vehicle models by 2024. This advanced HUD could provide drivers with a safer driving experience and is programmed to warn them of impending issues ahead of them.

Panasonic’s HUD will showcase the car’s speed and will integrate digital graphics (AR) to help show drivers the route ahead of them. The HUD also will point out obstacles and pedestrians; for example, a biker on the side of the road is marked with a digitized yellow bike!

There also will be predictive directions provided to drivers, much like a traditional GPS system. Drivers will be provided with data (via graphics) about how close their next turn is and where to turn. In addition, the HUD will adjust when the driver’s gaze changes.

SlashGear reported on Mercedes-Benz’ heads-up display, which debuted back in 2020, and the new innovative HUD was noted as being the first with augmented reality. The HUD displays pertinent driving data in AR to help driver’s safely navigate the road during night…or day.

HUD data shows speed and directional arrows to prompt drivers on when to take that turn. In addition, there are lights that help drivers understand how far to distance themselves from other drivers.

Since the release, many Mercedes-Benz dealers are highlighting the HUD for potential buyers. What makes these displays so cool is that they don’t need a separate screen; data is via the windshield.

The new Lyriq also features an augmented reality HUD. The Lyriq will use the Envisics AR HUD to display data for drivers. Envisics’ HUD technology also marks obstacles for drivers; it seems that the HUD could include a very graphic-heavy interface with all the pertinent data drivers need.

The HUD is an option for newer BMW models.

Invisible to Visible (I2V) is an in-development technology that utilizes augmented reality, and it could transform the driver’s journey. While I2V would provide warnings about impending obstacles and other future road hazards, it also would incorporate avatars to keep drivers company and even help them drive.

Drivers would wear glasses that allow them to see avatars in the car. These avatars could be family or friends who would keep the driver company on their journey. Or the avatar could even be a driving instructor or another type of guide.

I2V also would let cloudy skies be transformed into beautiful clear skies…with the help of augmented reality! And drivers having an issue finding a place to park also could get help from I2V.

Will an Augmented Reality Car Dashboard Become a Standard Feature?

Luxury manufacturers offer these high-tech digitized dashboards as an option, but what about other vehicle models? Will an augmented reality car dashboard heads-up display one day become a standard feature?

Now, however, most everyone owns some type of smartphone. In fact, almost every teenager owns a smartphone! Flip phones and other standardized cell phones are almost considered obsolete.

When backup cameras were first introduced they were an upgraded feature. Cars did not include these high-tech options as a standard. Now, though, cars do include a backup camera as a standard feature. Most buyers expect their vehicle to include reverse guidance of some sort. And these camera-guided options also likely helped prevent some fender benders or parking lot scrapes.

The augmented reality HUD is very much an upgrade now. Luxury manufacturers are offering them as an enhanced feature, although some could be making them standard. However, economical vehicles that are lower priced or even moderately priced vehicles likely are not offering this high tech upgrade as an option.

Eventually, though, as more buyers become acquainted with this type of technology and as newer, more advanced HUDs are introduced, these earlier models might be included in more economical models…and they could one day even become a standard feature.

In addition, some infotainment screens will project GPS maps that feature real world environment views with digitized arrows and other graphics that offer directional assistance. And those with vehicles that offer smart rear view mirrors also might see augmented reality data within their mirror.

Augmented reality was projected to be a $9.5 billion market in 2021 for mobile. As augmented reality begins to be embraced as a mainstream technology, more auto manufacturers might utilize it for enhanced vehicle safety and navigational features. However, the more advanced augmented reality HUD might not be available into a wider market range until this tech evolves further and the once advanced AR HUD becomes less expensive and more accessible for the average consumer.