The Best VR Headsets for Holiday 2020…and Other Gifts! 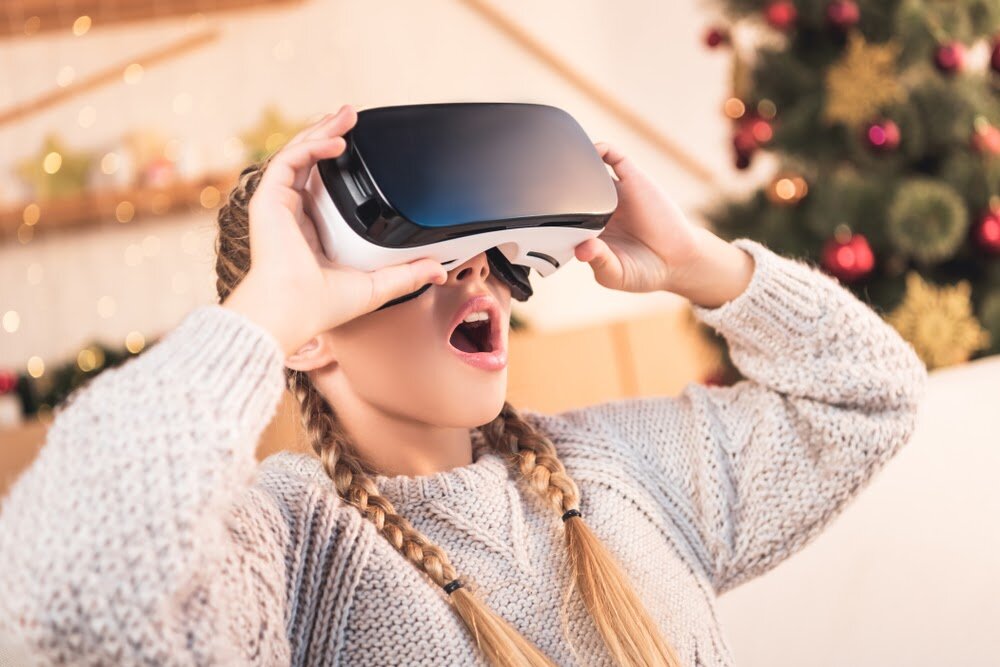 The last days are here for holiday shopping, and it might be too late to have those last-minute presents shipped to your door in time for the holidays. If you’re on the hunt for gifts for a favorite gamer or tech fanatic, though, a virtual reality headset might be a great option.

Not sure what virtual reality headset is best? These are the best VR headsets for holiday 2020, according to tech writers, and, yes, they can be found in stores. Although you may have to research the best prices.

Oculus is a known leader in virtual reality, but the company’s tech is used beyond the gaming world. Oculus Rift headsets are used by Ikea for a virtual shopping experience.

Why is the Quest 2 a must-have? According to the company, the Quest 2 features “A blazing fast processor and next generation graphics. The Verge reviewed this headset and noted it was one of the more budget-friendly options. The writer, Adi Robertson, included a list of pros and cons for the headset, with positive notes regarding the price and “the strong ecosystem.” Robertson noted, though, that users had to sign in with Facebook (this was noted as a ‘con’), the cable was an added investment cost, the headset also was a bit cumbersome, and, per Robertson, “socially awkward.”

Still, for the price, this may be a great gift option for teens or gamers.

For gamers who prefer to game via Playstation (some just have their favorites), the VR made by the company may be the ideal purchase. Shoppers can find the headset separately in some online sites. But stores may sell the bundle package, which includes a camera (and adapter for the camera), controllers and the headset…plus some game vouchers.

Prices and availability may vary by stores. If you’re on a last-minute hunt, you may need to shop around.

The HTV Vive Cosmos was listed on both CNET’s and PCMag’s list of best virtual reality headsets for 2020. The Vive Cosmos, though, isn’t noted as a gaming headset, but, rather, was recommended by PCMag as The Best for Whole Room VR.

PCMag listed a quick list of pros and cons for the headset, with positive notes for the Vive’s “sharp display,” motion controls, and extensive library. Negatives? PCMag noted that the headset was pricey, the cable was cumbersome and the headset required a special port.

CNET gave the Vive Cosmos positive notes for “Modular faceplates for extra features; built-in tracking; flip-up visor.” However, the writer noted that the big con was the price.

Meanwhile, The Verve’s headline for its review of the Cosmos was that the headset was “not out of this world. The writer, Adi Robertson, stated in the review: “While the headset is clearly capable of excellent performance, I was fighting its hardware and software every step of the way — from the clunky interface to some frustrating tracking issues. “

How much is the Vive Cosmos? Again, the price can vary per store, but it hovers about a penny under $600.

If the Vive Cosmos is out of the price range, the Valve Index may be, too. PCMag notes that the Valve index is pricey. The Valve Index is an investment, with a price tag of about $1,000 (for the whole package). The publication stated that it hadn’t tested out the Valve Index, though.

Scott Stein, writing for CNET, noted, though, that this is one that can be purchased a la carte. Stein explains that shoppers can use hardware from Vive with Valve, meaning that you might not need to invest a grand to use aspects of the Valve Index. Pick what you want to try.

While buying everything for the Valve Index might be expensive, the a la carte option could be the way to go…if you have hardware that will work with its components.

Virtual reality headsets may be a tech-savvy dream gift, but for families who may be on a budget, the virtual experience via headset might not be on the list. So how can gamers experience virtual reality without spending virtually the entire budget?

Can you have a low-budget virtual reality holiday? While headsets may be off the list and not on Santa’s sleigh, augmented reality is another way to gift a high-tech experience.

Here are some great game options to gift your favorite gamer this holiday…and they all utilize augmented reality platforms:

The OG augmented reality game! This game has been popular for years, and it’s great for the younger set. Just make sure young gamers pay attention to their surroundings, so they don’t get hurt. It’s easy to get caught up hunting for the cute Pokemon.

Not familiar with the game? It’s premise is fairly simple. Players find Pokemon hiding in the world around them. The game shows the real world environment, and the Pokemon are the augmented digital enhancements. They may be hiding anywhere!

This game features elements of virtual reality and augmented reality. Players can choose their wizarding profession—like Auror or Professor. Portkeys are discovered, and players travel to different places in the “wizarding world.” So where’s the augmented reality in the game? The player’s environment will show different magical places; after all, in the books, the Wizarding World existed within the real world…places were simply hidden to Muggles. There also are game challenges and even mysteries to discover.

Get fit and have fun…running from zombies! This is a game to play while running (or walking)! But when zombies are visible, you’ll have to quicken the pace. The game also lets players collect items during the game.

Minecraft is a popular game for kids…but adults may like it, too. Minecraft Earth lets players build their Minecraft world in the real world. The creations can turn into life-size worlds. Players also can find game items in their own world.

Other Tech Options for the Holidays?

With only a week left until Christmas Day, options for games and virtual reality headsets may be limited. If you still haven’t checked all those tech fanatics off your gift list, here are a few other options to make them happy on the holiday:

Ear phones or over the ear headphones are available in a variety of price ranges. Most stores keep many different brands in stock, so this could be a good option for a last-minute gift. Specialized headsets even include microphones so gamers can talk to each other while playing.

Whether a favorite gamer prefers Playstation or Xbox or uses Steam, there’s typically a gift card available that can be personalized with a budget-friendly dollar amount. There also are gift cards for Google Play and Apple, too.

For gamers who use a console, a gaming keyboard can make playing easier. There are many different keyboards on the market, and some even change colors.

A gaming chair or even a bean bag chair can make sitting for hours a bit more comfortable. Gaming chairs can come in all sorts of hues and styles. Some even feature LED lights. Comfort and size may be key.

If the chair is for the office or computer gaming, make sure it isn’t too big, bulky or cumbersome. Also, keep in mind the size of the room; you don’t want the chair to be the primary piece!

From Minecraft toys and plushies to other fun merch, pick up items that are game-related…but not the game itself. Funko Pop! makes some cool game figures! Blankets and bedding also could be available. Or knit a cool tech-themed scarf…if you have the time.

Extra or upgraded controllers and other accessories also could make a great gift for gamers. For tech-lovers there are also many accessories for PCs to enhance user experience. Speakers or a new mouse (yes, there are even specialized gaming mice) could be a great gift idea, too. Gaming mice also can be used with consoles.

There are so many options for tech gifts this year. For buyers looking at virtual reality headsets, the budget may need to be a bit heftier to accommodate for the price-tags for many of the best options. However, for those with a smaller budget, games that feature augmented reality tech could be a great gift idea…unless, of course, the gamer already owns the games!

Headphones, gaming mice, gaming chairs and even accessories can add to the experience for the gamer. Merchandise like novelty figures, toys or other items could be an inexpensive way to embrace the game theme without spending too much money. And, for those really hard to please on the holiday list, a gift card to Steam, Xbox, Playstation or even a favorite gaming store allows your favorite tech lover to get what they really want this holiday!