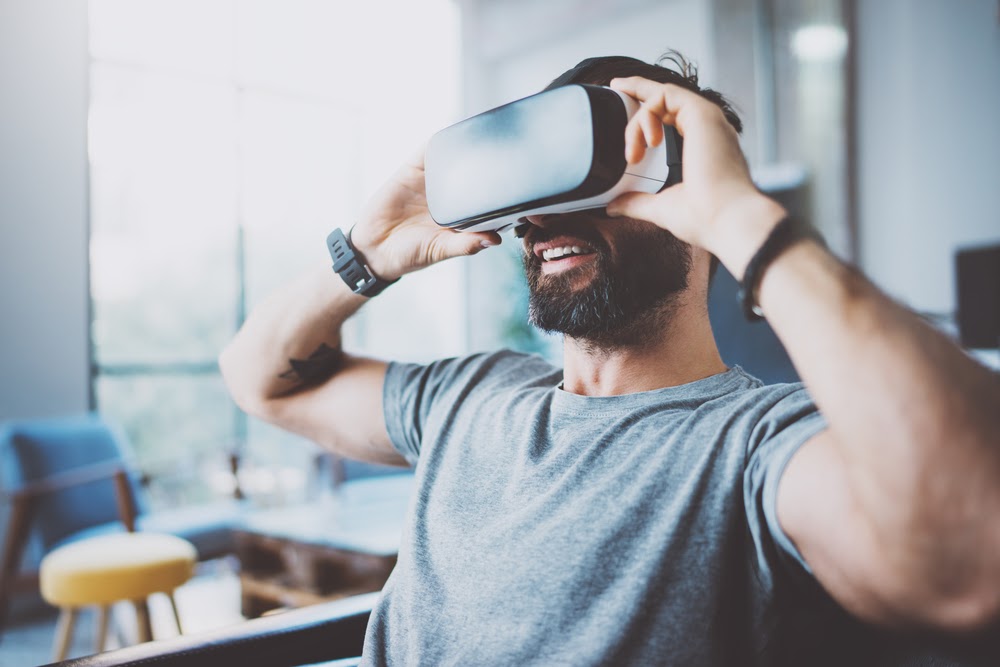 Now, Facebook is taking additional steps in an effort to become the leader in the augmented and virtual reality market. The company recently released an updated virtual reality headset, the Oculus Quest 2, and revealed plans to develop the first pair of augmented reality glasses.

What to Expect From the Oculus Quest 2

There are some similarities between the two models as well. Both the Quest and the Quest 2 have an estimated battery life of two to three hours. Each of these models is also designed with four built-in cameras that allow users to freely move around in their simulated environment. Both devices also give consumers access to a wide range of games within the Oculus library.

What Can You Do With An Oculus Quest 2?

There are many ways to use an Oculus Quest 2, including:

There are countless virtual games in the Oculus library, including puzzles, multiplayer battle games, shooting games, escape rooms, adventure games, and popular arcade games. Because there are so many games to choose from, there is truly something for everyone to play in the Oculus library.

There’s more to the Quest 2 than fun and games. You can also use your Quest 2 device to engage in various types of virtual exercises, including dance, high-intensity workouts, and boxing. You can even burn calories while practicing your golf swing or playing a round of tennis against another virtual user. There are plenty of fun and exciting ways to break a sweat.

Binge watch all of your favorite TV shows and movies using the Oculus Quest 2 device. The movie or TV show will be displayed on a large virtual screen in a cozy virtual theater, which makes it feel like you’re at a real movie theater.

You can use the device to access Netflix, Amazon Prime, Hulu, and other major streaming services. It also connects to YouTube, so you can watch your favorite funny videos within your virtual theater.

Use the Virtual Venues VR experience in the Oculus library to attend a live concert, comedy special, or sporting event without ever leaving your home. Once you’ve arrived, look around you to see other virtual fans who are attending from all over the world.

You can get a front row seat at these live events for a small fee or watch from a box seat, which is positioned further away from the action, for free.

Travel to far off destinations to explore beautiful beaches, tropical jungles, dusty deserts, and underwater oceans using the Quest 2 device. You can even see what it feels like to travel to the top of Mount Everest on the Everest VR experience within the Oculus library.

You will be completely immersed in whatever environment you choose, so it will feel as if you are actually there.

A number of apps within the Oculus library allow you to relive famous historical moments. For example, the Apollo 11 VR experience recreates the historic mission to the moon. You can experience every moment from launch to landing inside the space shuttle with the rest of the crew.

Hang Out With Other Users

Most virtual reality apps are single-player experiences, but the Rec Room app gives you an opportunity to virtually hang out with friends, family members, or other virtual users from around the world.

What you do inside the rec room is up to you. Some people prefer simply hanging out and chatting with their virtual friends, whereas others like to challenge their guests to fun games such as dodgeball or paintball.

Interact with your desktop computer screen in a virtual world using the Virtual Desktop VR experience. You can connect up to four different computers and switch back and forth between screens in seconds. You can also seamlessly scroll between monitors if you have a multi-monitor configuration.

This app makes it easier–and more fun–than ever before to juggle more than one computer or computer monitor. However, this experience is only compatible with Windows 8.1 or 10.

What is Facebook’s Project Aria?

Last year, Facebook announced that they were sending about 100 researchers into the field in Seattle and San Francisco as part of the company’s Project Aria initiative. Each of the researchers will wear a pair of glasses equipped with sensors that will allow them to map their real world environment.

The sensors on the Project Aria glasses are designed to capture video and audio footage of the wearer’s immediate surroundings. These sensors will also track the wearer’s eye movement and provide Facebook with location data.

Facebook’s decision to send researchers into the real world to gather audio and video footage of their surroundings has raised a number of privacy concerns.

The researchers will be wearing lanyards to identify themselves while out in public. But unless members of the public are familiar with Project Aria, they may not understand what these lanyards mean. This means anyone who is in the same area as one of the Project Aria researchers could be captured on audio or video without their knowledge or consent.

This isn’t the only reason why people are concerned about Project Aria. Many people are also concerned about the possibility that the audio or video footage could contain potentially sensitive information, including license plates. If this data is not properly protected, it could fall into the wrong hands.

Facebook has acknowledged the public’s privacy concerns related to Project Aria. But the company has promised to handle all data with care and provide training to researchers to ensure they know how to use the devices responsibly.

Facebook is only allowing employees and contractors to participate in Project Aria. Everyone who wears a pair of Project Aria glasses is given specific instructions on when and where to use the device. Researchers are allowed to wear the glasses to collect data in public places, but they cannot collect data in certain public areas, including public restrooms.

According to Facebook, researchers will not have access to the data collected by the sensors right away. Instead, the data will enter a three-day quarantine period after it is collected. During this period, sensitive information and identifying facial features will be blurred. This process was put in place to protect the public and ease privacy concerns.

Furthermore, Facebook will encrypt the data before it is uploaded from the devices to a separate storage space. This will make it even harder for non-authorized parties to access the data.

Facebook has also promised that the data will not be used to determine what ads people see when using the company’s apps. Instead, the company promises that it is only using the data to assist with the production of augmented reality software and hardware.

It’s clear that Facebook has made an effort to address the public’s privacy concerns, but it’s not clear whether the company has done enough to make the public comfortable with Project Aria.

These are solid ethical principles, but many people are still skeptical about whether or not Facebook is committed to adhering by them.

However, it is possible that other Facebook products will hit the market in the years leading up to the debut of the company’s augmented reality glasses. In fact, Facebook is expected to release a pair of smart glasses within the next year. Few details have been released so far, but experts believe that the smart glasses will be similar to Snapchat’s Spectacles.