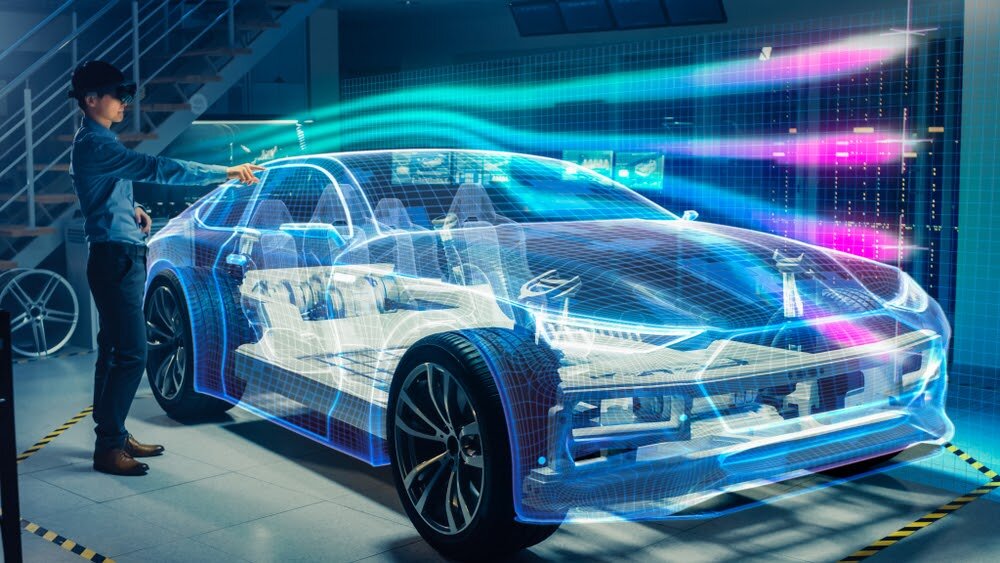 Augmentative and virtual reality has long been talked about as the way that will propel the automotive industry into the future.

More and more consumers are demanding for more enhanced safety and driving features in their vehicles. The demand for autonomous vehicles such as for ride-sharing services is also increasing.

The way to get to this future for automobiles? Augmentative and virtual reality is how automakers are going to make these car fantasies reality.

Many automakers are investing billions into tech companies that are hoping to create programs and tools to enhance future vehicles.

Ford is one of those automakers that hopes that spending money on tech will help them build a stronger consumer base and put them at the lead in the race for autonomous vehicles.

Ford is one of many leading automakers that are embracing augmentative and virtual reality. The automaker is utilizing new advances in technology in almost every aspect of their vehicles.

From designing and manufacturing to selling and displaying, Ford is incorporating both augmentative and virtual reality features to help enhance their manufacturing and buying experiences.

In order to create a more efficient and streamlined design process, Ford has started using Microsoft’s augmented reality tech, HoloLens which can be used for commercial and industrial applications.

For Ford, HoloLens has given their designers and engineers the ability to work together seamlessly to quickly create new car designs.

Using holographic goggles, designers can overlay 3-D elements onto a clay model of a vehicle then quickly evaluate and create new car designs.

For the most part, the program is only being used to work on details on a vehicle. The overall design of the vehicle is still done through clay modeling and then designers can manipulate, add, and alter detailed designs.

They can work simultaneously with engineers to help streamline the process.

According to Craig Wetzel, Ford’s manager of design technical operations, the process of designers implementing changes then sending it off to engineers then getting feedback than having to redesign is the main reason designing a new vehicle is such an arduous process.

“That takes time, and we find ourselves out of phase there a lot. But placing engineering and design in the same space, a process we call co-creation, streamlines that interaction,” Wetzel says.

The process not only becomes more efficient but allows for much more creativity, and according to Wetzel also makes the creating process much more fun for designers and engineers on the team.

Ford is not only using augmented and virtual reality in their design process, but they are also implementing advanced technology into the way they display and sell their vehicles.

In 2017, Ford demonstrated how augmented reality can be used in a way to help buyers experience the features of a vehicle from a whole new way.

“Think of augmented reality as the blending of virtual reality with real life,” says Garett Carr, Ford global auto shows manager. “It’s like having x-ray vision with the power to take people deeper into our product and technology stories- it feels a little like magic.”

Ford is betting on that augmented reality magic to help sell their vehicles in an innovative way.

Through augmented reality, the cars appear transparent and show all the features hidden beneath the car. Offering viewers a high-tech view of all the inner workings and features of the Ford vehicle.

Carr had mentioned that part of the challenges of selling and introducing a new vehicle at an auto show was that consumers were previously only able to view the outside of a car.

They had no way to view the actual final parts of the inner workings of a vehicle. However, with the new augmented reality technology has allowed consumers to see anything and everything they want of a vehicle without having to wear headsets or even seeing it physically.

Ford also displayed the use of virtual reality by creating a virtual space to display the new features of their vehicles such as the 10-speed automatic transmission on the F-150 and created a wind-tunnel effect over the Ford GT Supercar to exhibit the car’s active aerodynamics.

The overall experience allows consumers to get a more interactive and engaging experience when viewing new vehicles without having to test drive them. This helps consumers learn about the new features of a car and also allows Ford to gauge consumer wants and save on vehicle mileage on new models.

These same technologies are similar to their virtual showroom where consumers can build and price their potential vehicles. You can get a complete view and pricing of the exact vehicle that you want.

While the experience on their retail site might be a paired down version of their auto show display, it still helps consumers view a vehicle inside and out. This can help them make a more definite purchase when they finally do visit a dealership.

You can even view how some cars would look in your driveway!

Using programs such as RelayCars, dealerships can sell and display vehicles using a virtual showroom. Shoppers can view and see all the details of a vehicle before even stepping foot into a dealership.

This can help sellers lock in sales right away as the buyer comes in more informed and likely more committed to buying or leasing a vehicle.

Ford is also utilizing virtual reality to help with maintenance upkeep in cars and to assist technicians to repair vehicles, especially newer models that require more and more technological programming to repair.

In a partnership with automotive supplier Robert Bosch, Ford will provide training for service technicians at dealerships to work on the new Mustang Mach-E electric crossover.

This vehicle will include tech that many current technicians might not be trained to work with including a new high-voltage system.

Auto repair technicians are starting to need to become computer programmers as well with the amount of software being implemented into vehicles today.

However, Ford is working to make auto repair easier and quicker by outfitting their technicians with virtual reality programs that can help them identify problems on a vehicle and repair them quickly.

Ford is also implementing them in training programs for technicians. This gives them a chance to see the actual details and understand the components and steps before working on an actual vehicle. Making new Ford technicians even more knowledgeable and experts before even working in the field.

While much of the augmented and virtual reality that Ford is introducing is relatively new, the automaker has been incorporating this very same technology into their vehicles little by little.

Their vehicles include features that many automakers already implement such as rearview cameras to assist with parking, blindspot detection, and more.

Eventually, the company hopes to introduce augmented reality to create a windshield dashboard that would help enhance the driving experience.

However, Ford is also hoping to get their foot in the game with autonomous vehicles.

The automakers have invested $1 billion in a startup tech company, Argo AI to help make autonomous vehicles a reality.

Although the company hoped to have an autonomous vehicle service on the road by 2020, they have recently pushed that deadline to 2022. But the company has been testing pilot vehicles and programs in the meantime.

As the demand for autonomous vehicles rises, the race to get their vehicles on the road relies solely on perfecting the technology. The most important feature when considering autonomous vehicles using augmentative and virtual reality is safety. A feature that Ford takes seriously and has prioritized in creating their cars.

Ford might not be the only major automaker embracing augmentative and virtual reality, but they are certainly using the technology in innovative ways.

Their use of the technology will likely have a strong influence in the automotive industry to utilize augmentative and virtual reality more regularly.

Many dealerships already are following suit by using virtual showrooms that allow consumers to view more features of a vehicle from the comfort of their own homes.

Companies such as RelayCars are helping consumers to view and purchase Ford vehicles before they even go physically to a dealership. A virtual reality showroom can help get consumers to learn more about a vehicle and helps them to make a decision quicker.

Augmentative and virtual reality is changing the automotive industry for the better. It allows for more safety features in vehicles and also helps to keep the creating and manufacturing process of vehicles safer as well.

Even repair technicians such as Ford’s are utilizing the technology to make their work safer and more streamlined. Although augmentative and virtual reality is still in the early stages of working with automakers, we are likely to see more innovation and influence of this tech in the field for years to come.