What Cars are ‘Gas Guzzler?’ 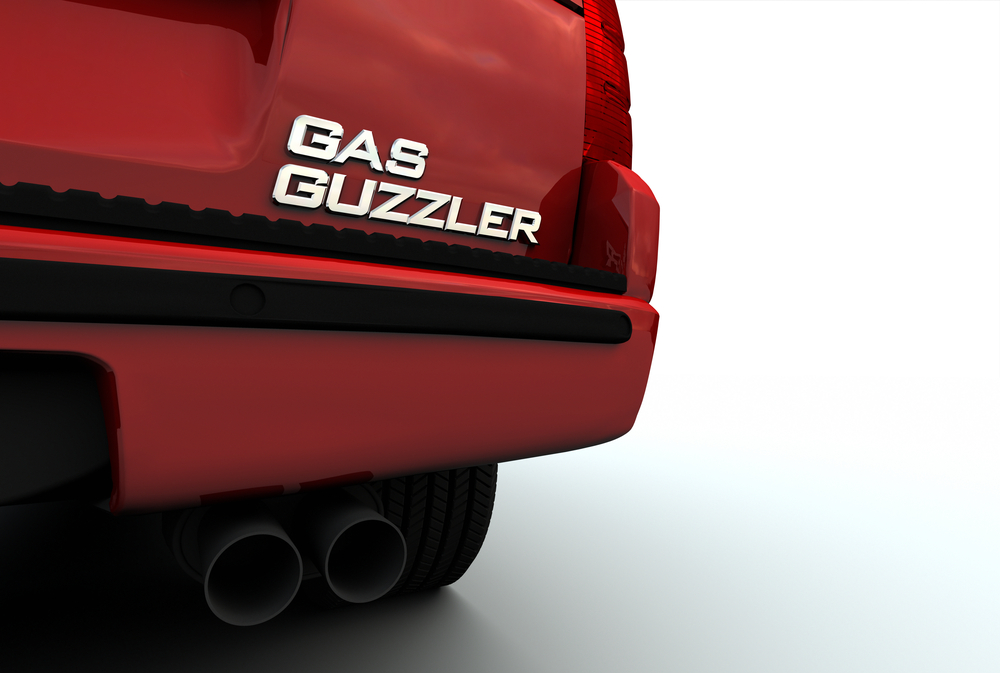 The price of fuel depends on supply and demand. Prices can surge when there is an oil shortage or if there is a natural disaster that affects the supply chain. For car owners who drive electric automobiles, the price of fuel is inconsequential. However, those who still rely on the pump to power their drive tend to be at the mercy of the oil industry.

Some automobiles are more fuel efficient than others, leading to fewer trips to the gas station. There are many models, though, that might have earned the reputation as ‘gas guzzlers.’ In the past, some models known as gas guzzlers included:

What Does Gas Guzzler Mean?

A vehicle is dubbed a ‘gas guzzler’ because it offers poor fuel efficiency. This means that the vehicle will drive fewer miles on a gallon of gas. For a standard vehicle, though, what is considered ‘good gas mileage?’

According to Car and Driver, gas mileage—and what is considered ‘good’—depends on the type of vehicle being assessed. For example, the site explains that 25 MPG might be a decent gas mileage for a sports car, while larger vehicles like an SUV might only get 20 MPG combined (city and highway).

Driving on the highway is usually more fuel efficient than city driving, which is why drivers will notice that the MPG data for vehicles tends to be higher for the highway.

What is Gas Guzzler Tax?

In the late 1970s, vehicles that were considered gas guzzlers were given an additional tax that was known as the ‘gas guzzler tax.’ This tax wasn’t and still isn’t imposed on buyers.

Instead, manufacturers (or importers) are taxed for cars that are fuel inefficient. The Environmental Protection Agency (EPA) explains that buyers will see the tax on the sticker of a car and that “…the lower the fuel economy, the higher the tax.”

The EPA also notes that sports utility vehicles (SUVs), trucks and minivans aren’t assessed this tax. Why? These particular vehicles weren’t common for consumers in the ‘70s when the tax became a part of the Energy Tax Act of 1978.

What cars are assessed this tax and what does the EPA define as the cutoff for acceptable fuel efficiency? According to The Daily Drive, cars “…must earn a non-adjusted EPA combined rating of 21.5 miles per gallon.”

Car buyers can review the list of vehicles that are assessed the tax. The EPA posted a list of models through 2016. Popular vehicles that are known as ‘gas guzzlers’ and taxed accordingly include the 2016 Chevrolet Corvette, 2016 Ferrari F12, 2016 Bentley Flying Spur, 2016 Lamborghini Huracan, 2016 Dodge Challenger, 2016 Aston Martin Vanquish, 2016 BMW M5, and more.

Buyers aren’t assessed a gas guzzler tax and aren’t responsible for paying this tax. Again, the manufacturer or importer will be taxed. However, the tax is noted on the vehicle’s sticker and might mean a higher price for consumers.

While a car buyer won’t pay the gas guzzler tax, that extra bump to the manufacturer might increase the sticker price to the consumer. However, even if consumers don’t pay more when buying that vehicle, a gas guzzling car will cost more to own thanks to the vehicle’s gas consumption.

Consumers might notice that many of the cars taxed because of fuel inefficiency are muscle cars, sports cars and high-end luxury cars. Those who have the budget to purchase a Ferrari or a Bentley likely aren’t worried about paying more at the pump; they want the car that they want regardless of the cost. These buyers might not be too concerned about the extra cost of gasoline.

Car owners of ‘gas guzzlers’ also might not use these cars as their primary vehicle. A Corvette or a Lamborghini might only be taken for a drive occasionally.

For car buyers who are on the hunt for the most fuel efficient vehicle, though, the EPA’s list of known gas guzzlers might be worth perusing.

What Vehicles are the Most Energy Efficient?

Back in the late ‘70s, buyers only had the option to purchase vehicles with fuel injected engines. Cars were powered by fuel, and electric vehicles or hybrid models weren’t introduced for decades.

Today, though, buyers don’t have to be tied to the pump. Now car buyers can opt for hybrid vehicles and electric models. These vehicles are the most energy-efficient on the market.

Hybrid vehicles typically boast about 50 MPGe, while electric vehicles are measured by their range (this is how far it can drive on a fully charged battery). The longest-range electric model is produced by Lucid and has a range of 520 miles.

One of the most fuel efficient vehicles on the market—that is neither hybrid nor electric—is the Mitsubishi Mirage. The Mirage offers an estimated 43 MPG on the highway and up to 36 MPG in the city. The vehicle also is one of the most economically priced models on the market with a base price less than $15,000.

While the Mirage is fuel efficient and budget-friendly, it doesn’t score well with sites like Car and Driver, which rated the Mirage 2.5 out of 10. The model was noted as having “poky acceleration” and less than impressive interior features.

Some buyers might not have the budget to purchase an electric or hybrid model. Other fuel-efficient standard vehicles include:

Car buyers might focus on models that boast more than an estimated 30 MPG combined. While the Mitsubishi Mirage offers the best MPG of the standard models, there are many other fuel-efficient models on the market. For example, the Chevrolet Spark offers an estimated 33 MPG (combined).

Finding the Most Fuel Efficient Vehicle

Car buyers can explore all their vehicle options with RelayCars. The site lets buyers explore different models via 3D models and augmented reality.

RelayCars includes thousands of models, including luxury brands like Ferrari and Lamborghini. RelayCars lets users research their vehicle choices from the comfort of home. With a tablet or a smartphone or even just a PC, car shoppers can explore their favorite models in 3D.

Using a fingertip or the mouse, buyers can turn the vehicle image around to view the car from all angles. RelayCars also lets buyers explore the interior of the car, too. Each model includes numerous images and interactive features.

With RelayCars, car shoppers can explore as many vehicle models as they wish. There is no limit on exploration! In addition, RelayCars also provides all the vehicle’s specs and the model’s MSRP, too.

RelayCars can be used to explore the vehicle, and it also can be used to research the price and features of different models, too. For buyers looking for the most fuel efficient vehicles, RelayCars also includes data on each model’s estimated MPG.

While RelayCars won’t include details related to a gas guzzler tax, buyers can look for this on the sticker of the vehicle when shopping at the dealership. Again, this tax is related to cars that are deemed fuel inefficient, but the tax isn’t applicable to SUVs, trucks or minivans.

The most energy-efficient vehicles include hybrid models and electric options. Some buyers, though, might feel that the price for these more efficient models is out of their budget. However, those who have long commutes could save money by choosing a more efficient hybrid. When gas prices go up, those who drive less efficient models may see their budget crunched by the price of fuel. Sometimes buyers need to consider both the sticker price and the price at the pump, too.